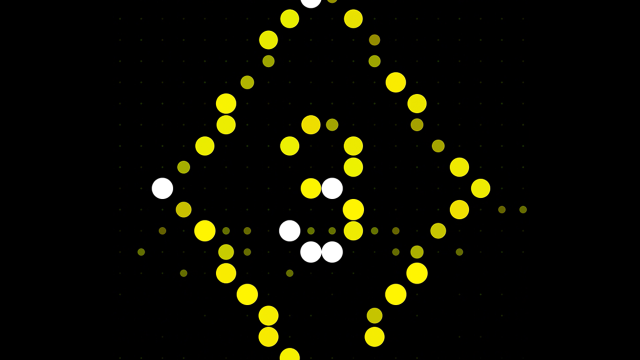 For my final project, I wanted to string a narrative between the disparate projects I had been working on throughout the semester. A growing fascination with emergent behavior and biologically inspired interactions led me to develop some simple tools for exploring these phenomena, both for real investigation as well as some fun with a supposed investigation. When mentioning emergence with regard to design, behavior, or systems, I am always asked for clarification, so it only seemed natural to discuss the concept of emergence and have some fun with it.

In 1900, Harry Houdini escaped the unescapable, some would even say he emerged unharmed time after time… While this is not the kind of emergence I want to investigate, I do want to bring the audiences attention to the topic with an immersive first trick. I chose a trick that I decided to learn and practice after seeing a video of this quick but clever hand trick. The origins of the trick might be David Copperfield, although I wouldn’t be shocked if it were simply popularized by him since the first time I saw the trick was from another performer. The original trick has the performer ask the audience to follow along, crossing arms, locking fingers with thumbs pointed down.

To execute this properly, I had to make sure I could talk about the steps, while not precisely following them. Focussing on thumbs down is a good way to make sure people know they are doing it correctly, and the reveal of the magician pointing thumbs up is a strong contrast. I ignored the thumbs aspect and simply changed the illusion from stuck in a twist to not stuck in a twist, it felt slightly more Houdini. My main focus was keeping the audiences attention on my instructions and keeping a lot of movement around my arms in the explanation, so that most viewers would be focussing on their own hands and for the few focussing on mine, the movements would be distracting enough that when I  make a small change to what I suggest, it is nearly impossible to see it happen.

If you want the video closely, it is still tough to see when the switch happens, but I switch my arms when I turn from right to left, allowing my left arm to be slightly obscured in the turn as I quickly turn my arm and lock fingers in the process. Directly after finishing the trick, I went on to the next piece so as not to keep people thinking about how that might have been done. Although in some senses, it is a trick that is fun to try and recreate, even with a video of it in front of you. (try it out for yourself!)

For my first trick of the semester, I started with a simple card mixing trick that Marco introduced the class. I liked the trick because the mechanics of the trick do the heavy lifting, while the magician’s assistant feels like they have some control over the outcome. Additionally, the mixing element of the trick fit quite nicely with my interest in evolutionary algorithms and introducing a bit of chance to reveal emergent patterns. When last performed, some of the suggestions included making the environment feel more sterile for working with genes, adding some facsimile for the same cause, and making the story more concise. I removed the portion of my talk about the design elements within the suits as it lengthened the story and more importantly, felt like a different story all together.

To perform this trick, i placed on a tyvek clean suit, one that I could have asked my assistant to wear as well, but I didn’t think it added that much and time was a bit precious. In some senses, i would consider the tyvek suit, my magic circle. Once I had the tyvek suit on, I could then show the audience things the might never have been able to see before, and instead of Jon being on stage, there was now an expert in the field, so the story and trick became a task not for myself, but this expert on stage.

Instead of explaining the trick in great detail, which simply brings a set of cards off of the top of the deck to the top of each of the assistants created piles, i will focus on the augmentations.

The story is the first augmentation, and I revised and shortened my material to describe the evolution of many different suits and card designs from over 800 years ago, to the ones we are now familiar with today. I created a set of slides that showed a left to right evolution of diamonds, clubs, hearts, and spades with each of their ancestors, including the extinct stars (which were a 5th suite in the french deck for some time). I tell the story that just and humans have a variety of races and traits that have emerged from years of mixing and and generations of separation, the cards have a similar history and so we split the deck into 4 continents, or piles. Each pile mixing and mating among itself as well as going off to join the other piles. We pause to look at the DNA of the cards in the pile, seeing bits of DNA that reflect both the suit as well as a history of other suits.

For the DNA viewing, I made some small changes and improvements to my previous augmented camera setup. First of all, I mounted the camera so that it was pointing down, and it served as a great tool for the audience to clearly see what was being done underneath the camera. Previously to show the DNA on the card, I had held the card up close to the lens, revealing DNA. However, we know that cameras can only focus so close and that it is hardly likely that we are actually seeing a view that zoomed in. This time, I added a feature I like to call enhance, which smoothly zooms into a location I choose on the screen, jumping us forward much like the Eames’ Powers of Ten video. As we enter 5x, 25x, 125x zoom, the image becomes terribly blurry at which point the DNA simulation fades in. When I zoom out, the DNA fades away and the audience witnesses a new camera microscope that suggests some suspension of disbelief that these cards will actually be mating in their piles.

As the trick concludes, the family members of single family are revealed, and instead of simply having one expected offspring, they arrive with another offspring, a relic of the past. A suggestion early on in the class of bringing back a suit that is no longer around lent a light hearted end to the evolutionary tale.

Along with the theme of enchanted objects, i want to make a series of toys that act as both a learning tool as well as a slightly magical object. Having toys that respond to their neighbors seems slightly futuristic, and in fact, mimics much of what biology is already doing. A form of this mimicry is called cellular automata, where a single cell follows a simple set of rules based on its own state and the state of those around it. In a 1 dimensional version of cellular automata, each cell can be thought of as a single pixel in a row on your screen. And each row representing a generation, so as to see the history of states. Through this simple set of rules for a pixel to be white or black based on the state of itself as well as its two neighbors, emerges a series of 256 unique patterns(given the same single starting state) that are in some cases obviously repetitive and in other cases, shockingly complex. 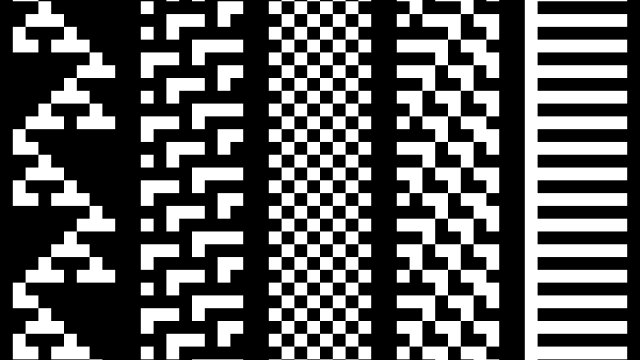 5 different rulesets for Wolfram’s 1 Dimension Cellular Automata, each row is a generation

While I am continuing work on simple embedded devices that allow these kind of emergent patterns develop in your hands, it became clear to me that the experience, as-is, is not all that magical or compelling. This will be an area of further design decisions about these “AutomaTiles” but for now I needed to figure out how they will contribute to my story on emergence.

At one point, I had planned to let a metronome run and be the clock for these evolving cellular automata, but once again, it felt like a distraction to the performance. If I were to perform with a metronome, I should have kept headphones playing a metronome sound in them for a couple of weeks, so that I don’t think twice about it. 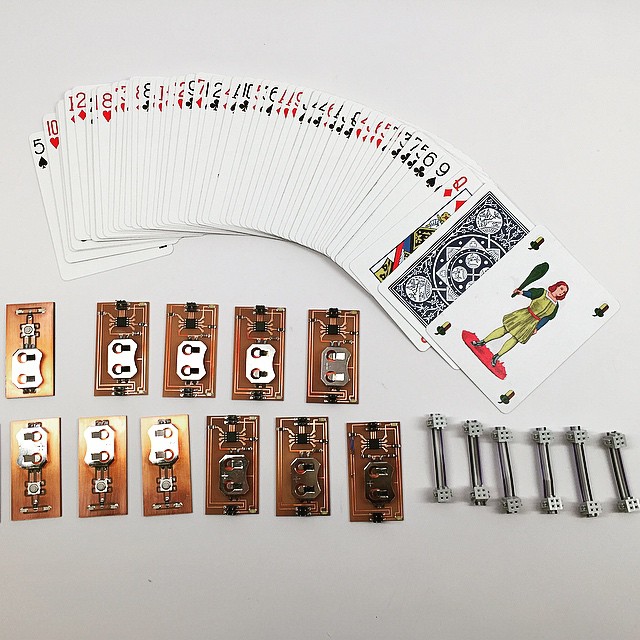 Without the metronome and a deep focus on the AutomaTiles, I needed to develop something that brought the entire story together and concluded with something bigger than the sum of its parts. A common method in standup comedy as well as other forms of story telling is a callback, a reference to earlier in the performance that capitalizes on the previous experience and has a multiplicative effect. For me, that callback would be a card trick reveal, and the reveal would have to be more grandiose than the last. While introducing the concept of automata, I discuss the simple interactions exhibited by a type of fireflies. The synchronization of a type of fireflies has been speculated as a mating call, but could serve other communicative properties as well. I show a video/simulation of fireflies as we watch the fireflies slowly but surely find each other in unison.

Earlier in the act, I invited an audience member to take a card at random from the deck, to not be revealed to me, yet only known by the audience. As I present the fireflies and a physical incarnation of the simulated fireflies, I ask a few more audience members to use firefly like flashlights to communicate with the ones simulated on screen. As the audience is asked to flash quicker and quicker the simulation resolves with not all fire flies in sync, but perfectly out of sync to show the value 3 of Diamonds, the card in my hand at the time.

The final reveal of 3 of Diamonds through the firefly simulation

Of note: During my performance, that “random” card for the audience member, was in fact truly random, and I had no idea what it was. However, I did reveal a card that was not random, the 3 of Diamonds, which was supposed to be in the audience members hand, so I was able to save the trick and simply show that a pattern could emerge amongst the fireflies with simple rules, and the fact that they reveal the card in my hand is true emergence or simply magic!